What to do: Remodel or Move?

Neil Shapiro considers himself “within shouting distance” of retirement. He and his wife could have sold their home near Chicago and bought a condo in the Sun Belt, long a lure for American retirees.

Instead, the couple bought another single-family home — in Boise, Idaho.

“We wanted to come to a place where we want to live, and work for a few more years,” Mr. Shapiro said. A city with an active economy was also important, he said, so that “once I do retire, if I get bored out of my mind, there will probably be employment opportunities.”

A wave of retirements among baby boomers in the coming decades will have a big impact on residential real estate, in ways that are upending some conventional assumptions. Baby boomers are working longer or opting for “phased” retirements, in which they work at least part time after leaving their primary careers. They are changing the definition of a “retirement” locale, driving migration to cities that have not only affordable housing and recreational opportunities, but also robust economies that can support jobs.

It’s still true, however, that most retirees adamantly prefer to stay in their homes and communities as they age, rather than relocate. This group is choosing to alter their homes to make them easier to navigate, rather than sell them and downsize.

And while the boomers nearing retirement age are generally too young to need assisted living facilities or similar housing, they already are having an impact on that market: They are influencing how and where those properties are built, as the decision makers on behalf of their parents.

“Multiple trends are happening at the same time,” said Lawrence Yun, chief economist with the National Association of Realtors.

The association recently compiled an analysis of markets attractive to “leading edge” baby boomers — those aged 60 to 69, who are nearing or at retirement age — because they offer not just moderate climates, but also affordable housing and strong economies that are attractive to self-employed people, in particular.

“I don’t discount the importance of the weather,” said Paul Irving, chairman of the Milken Institute Center for the Future of

While the list includes plenty of Sun Belt cities in Florida and Arizona, it also includes less obvious locations like Boise, as well as Raleigh, N.C.; Greenville, S.C.; Chattanooga, Tenn.; and McAllen, Tex., in part because housing in such places is relatively affordable and taxes are low. Such housing markets are attractive to baby boomers, who are moving en masse toward retirement age but don’t necessarily want to stop working all at once.

Mr. Shapiro, 61, said Boise filled the bill. He and his wife, Rhonda Imhoff, 53, enjoyed living in Northbrook, Ill., a northern Chicago suburb with excellent schools, and partaking of the city’s cultural resources while their children were young. “We enjoyed all the benefits,” he said. “But we paid for them,” both financially, in stiff property taxes, and in traffic-laden commutes.

They started visiting Boise when Ms. Imhoff’s oldest daughter decided to attend Boise State University. Ms. Imhoff had grown up in Boise, but hadn’t lived there for decades and was pleasantly surprised to learn that the city had grown and changed. “It’s a totally different place now,” she said. The city of about 214,000 people has a Shakespeare festival, and residents can see touring Broadway shows and attend sporting events at the university.

In Boise, the couple bought a single-family ranch-style home with three bedrooms: “We weren’t ready to completely downsize,” Mr. Shapiro said. Yet the equity from the sale of their home in Chicago enabled them to buy the house with little debt, and property taxes in Boise are $10,000 less than they were in Illinois. “That’s real money,” he said.

On a recent weekend, while temperatures dropped to frigid levels back east, the couple hopped on their bicycles and rode 15 minutes in 70-degree weather to attend a college basketball game.

They kept an eye on their future needs, however, when house hunting. “One of our nonnegotiable demands was that it had to be a single-level home,” Mr. Shapiro said, so they would not have to worry about climbing stairs when they were older. And although they chuckled nervously about it, they also made sure its hallways were “wide enough for a wheelchair.”

Such concerns are driving another trend, as retiring boomers who do not want to relocate seek to adapt their homes to their changing needs.

Most people over age 65 say they prefer to stay in their own homes as they age, according to the advocacy group AARP. And indeed, people over 65 are far less likely to move (4 percent) in a given year than those under 65 (13 percent), according to the federal Administration on Aging. Those who do move usually stay in the same county or state; only 19 percent of older movers, for instance, moved out of state or abroad from 2012 to 2013.

But those wishes are increasingly in conflict with the scant availability of housing that can accommodate older Americans’ needs. Fewer than a quarter of homes occupied by people 55 and older have a full complement of features, like no-step entryways, no steps between rooms, a full bedroom and bath on the first floor and wider hallways, that make them suitable for older people, according to the Joint Center for Housing Studies of Harvard University.

That suggests many homes are in for significant remodeling. “A lot of work has to be done,” said Kermit Baker, director of the center’s Remodeling Futures Program.

It’s already starting to happen in some areas. Some markets with high concentrations of people aged 55 to 64 report high spending on home improvements by households of people in that age group, the Harvard center found. And spending on home improvement in 2013 was modestly higher among owners in that age group who had lived in their homes 20 years or more.

David Tate and his wife, Carol, both 65, of Yorktown, Va., retired five years ago from careers in the health care field. They considered moving or downsizing, he said, but ultimately decided they wanted to stay put. Their grown children, and their grandchildren, live close enough for frequent visits, and their five-bedroom home provides plenty of space for them to stay. They also relish the change of seasons, as well as the area’s rich history: Mr. Tate enjoys volunteering as a docent at the Yorktown Victory Center, as well as visiting Colonial Williamsburg and Jamestown. 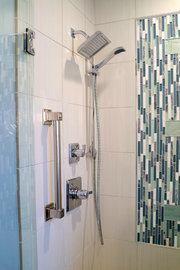 Once they made the decision to remain, they started thinking hard about the 42-year-old, two-story home where they have lived for the last 28 years. “It was built with the needs of a family in mind,” he said, not those of an older couple.

From their career experiences — Mr. Tate had worked at onetime as a long-term care executive, and his wife was a nurse — they knew that the right design elements could make a home much more livable for aging residents.

“We knew things like, when you’re older, you need more light to see,” he said. “And grab bars in the shower are essential.”

They found a contractor who is certified in “aging in place” remodeling, Robert Criner, to help them redesign a bathroom with an eye toward the future. The new shower has a low curb that is easy to step into, along with a shower bench and a removable shower head that can be used while seated. The new toilet is higher, making access easier, and it has more space around it to make it easier for someone else to assist with rising and sitting, if necessary.

Since older people often feel the cold more severely, features were added to warm up the bathroom, like radiant heating in the floors. One day this winter, the outside temperature was 17 degrees, but the floor was a toasty 84, Mr. Tate said.

Although the couple had paid off their mortgage, they took out a home equity line of credit to help fund the $59,000 project, Mr. Tate said.

In that they are like many older homeowners who can rely on home equity to finance some changes. A new study from Merrill Lynch and Age Wave says more than 70 percent of homeowners over 65 have no mortgage, and home equity for homeowners over 65 averages more than $200,000. (The proportion of homeowners from 55 to 64 with no mortgage is lower, 46 percent, but this group still has average home equity of about $195,000). Taking out a loan secured by a home to fund renovations may also allow the owner to deduct the interest on a tax return. In some cases, modifications — like lowering cabinets to make a home wheelchair-accessible — may be tax-deductible, if they are medically necessary.

Yet some accommodations can be made relatively inexpensively, Mr. Criner said. For instance, doorways do not necessarily have to be widened to admit a wheelchair; in some cases, doors can be fitted with offset hinges, which swing the doors outward when they are opened, adding a couple of extra inches without any demolition.

It also helps to compare the cost of needed changes with other options, like moving. One client decided adding an elevator, while expensive, was actually the least costly alternative. “It may be ‘expensive,’ but compared to what?” Mr. Criner noted. “Compared to building a mother-in-law suite on the first floor, it’s cheaper.”

Still, couples should be realistic about the cost of remodeling. One type of house that often is not salvageable is a split level, with stairs going both up and down. “I tell them to move,” said Susan Bachner, a home modification consultant in Lexington, Ky. “I don’t think you’ll get your money out of it.”

It might seem that retiring boomers would create demand for senior housing and assisted living facilities. But right now, they are generally too young for such options, said Beth Mace, chief economist with the National Investment Center for Seniors Housing and Care. The average age of residents in such facilities is 84, while the oldest boomers are now 69 (the baby boom generation is generally considered to be those born from 1946 to 1964), so they generally will not create serious demand for these properties for another decade or more.

However, she said, boomers do influence the market for such properties in an important way: “They’re the adult children of today’s residents.” It’s often an adult daughter or son who makes the decision to move a parent into a senior property, and typically they like their parents to be relatively close to where they live — ideally, within a 10-minute drive — so they can stop by and visit. “This — the adult child influence — is one significant demand driver for seniors’ housing,” she said.

So properties are often being developed in population centers where jobs are concentrated, Ms. Mace said, “catering to adult children bringing a parent back” from a retirement location.